The history of museums in the United States and of World’s Fairs are deeply intertwined, but easy to overlook. Several of the museums that we know and love today– including the Legion of Honor in San Francisco, the Field Museum in Chicago, and the Queens Museum in New York City– have World’s Fairs as part of their origin story. World’s Fairs themselves, and the comprehensive, wonderful, complicated exhibitions that characterized them, transformed the nature of collection building and the tradition of exhibition in ways that are still reflected in our modern museums.

Even so, two notable structures built for international exhibitions that are no longer extant are two of the most remarkable: London’s Crystal Palace, and its slightly later New York counterpart. The present-day absence of these awe-inspiring structures is the kind of thing that easily captures the imagination– as evidenced by the proposal to reconstruct London’s Crystal Palace that was announced recently. 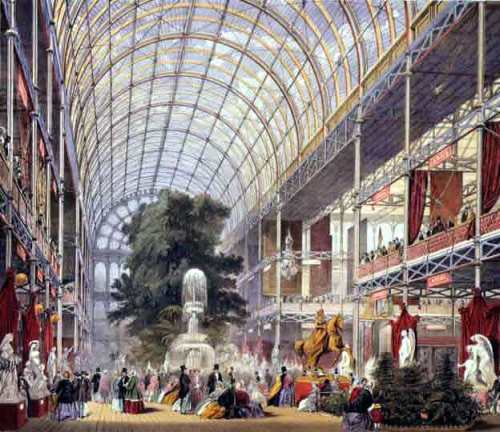 The original Crystal Palace was built in Hyde Park in London for the Exhibition of 1851. It was subsequently reconstructed in Sydenham, a short train ride’s distance from London proper, in 1854. New York City’s counterpart, also known colloquially as the Crystal Palace, was built for the city’s first international Exhibition, the same year that the Sydenham Palace opened. Both buildings, constructed of iron and glass, were possible to build because of recent technological advances that made these materials less expensive and available in larger quantities.

The Palaces were the pinnacle of modernity, in terms of both industrialization and international outlook; they were not only the height of architectural splendor but also of technological advancement, and they presented these two achievements as wholly symbiotic. As both Palaces burnt to the ground—first New York’s, in 1858, and later London’s, in 1936—the Crystal Palace as a hallmark of modernity proved to be at once fleeting and portending of modernity’s dangers. But, for those brief four years, Crystal Palaces stood as beacons of industrialization’s promise on both sides of the Atlantic Ocean.

Today, the two structures differ greatly in terms of the remnants they have left behind. In London, the neighborhood where the Crystal Palace once stood is now known by that name. The former site is now a park, with a sculpture—really a memorial of sorts—marking one corner of where the building stood. Large marble sphinxes still flank steps. There are traces enough that it seems tantalizingly within reach to rebuild the Palace to its former glory, however complicated that project might actually be to execute. 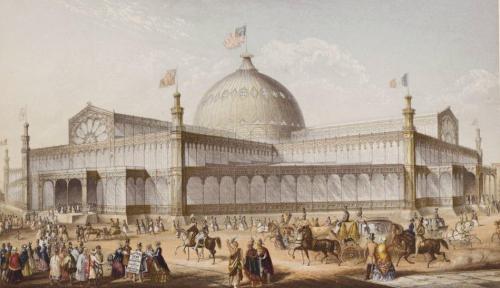 Conversely, although the New York Crystal Palace was placed on what were the outskirts of the city,  it occupied a piece of land that is now familiar to New Yorkers and tourists alike: Bryant Park.

Next door to Bryant Park, the New York Public Library has extensive holdings related to both Crystal Palaces, including many primary documents; for those of us not in the vicinity of the library, its digitized collection includes a large collection of images. Fittingly for exhibitions intended to be accessible by people across class boundaries, and luckily for those of us fascinated by the history of collecting, the Crystal Palaces are relatively easy to research, even without an educational affiliation. Because of the popularity of the exhibition (as with other World’s Fairs, also), souvenirs, reviews, and reactions to the exhibitions were numerous and remain plentiful in library and archival collections—even better, much has been digitized.

1854 saw the publication of official guides to the exhibitions of both Crystal Palaces. Today, these texts can be mined for insight to the practice of exhibition⎼going in United States and England at the time. They’re a fascinating hint as to how the Palaces functioned within societies grappling with the onslaught of a new modern age.

An overabundance of statistics and figures—the dimensions of the building, the amount of glass and steel it took to construct them—reveals a concern with translating the technological advancement of the edifices into layman’s terms. The highest transept of the Crystal Palace in Sydenham, for example, is said to stand six feet higher than London’s Monument to the Great Fire. The New York guide extolls the virtues of the Crystal Palace’s dome, while admitting it remained a poor substitute for grander ones abroad but still awe-inspiring for “our untraveled countrymen.”

Such blunt reference to class is unsurprising, as the guidebooks seized the opportunity to gently guide the development of good taste for the working class. “Unity in architecture is one of the most requisite and agreeable” qualities of a building, says the London guide. It describes the Crystal Palace as being an example of “Modern English” architecture, a new tradition inaugurated with the reconstruction of the Palace in Sydenham. The exhibition guide in New York likewise gives recommendations for what to appreciate about the Crystal Palace. “Study this first view carefully,” it suggests, “for there is no place on this side of the Atlantic from which you can form so good an idea of the natural alliance of sculpture and architecture.”

For the museum nerd wishing to sink her teeth into the history of exhibition practice via primary sources, the Crystal Palaces are a great and accessible place to start. As debate surrounds the rebuilding of London’s Crystal Palace, it’s particularly useful history to reexamine.

Here are some resources I’ve found particularly useful and interesting. If you come across something, add it to the comments—perhaps they can serve as a crowd-sourced bibliography.

This entry was posted in Uncategorized. Bookmark the permalink.