Pictures of Pictures: A Response to Edward Winkleman’s “What Has Art Become to Us?”

Edward Winkleman’s “What Has Art Become to Us?” blog post today addressed two current trends in the way the public interacts with art. The first is a tendency to see art as an investment commodity more stable than gold, and the second is the tendency for people to take digital photos of the art they’re looking at. I’m more interested in the latter trend and in a particular distinction Winkleman makes between art viewing venues. He suggests that people are more likely to photograph art in museums than in galleries. He also considers this to be a kind of art viewing “via a digital filter.” He also suggests that museum environments sometimes have qualities similar to amusement venues, qualities that might contribute to this as a preferred way of art viewing for museum visitors. 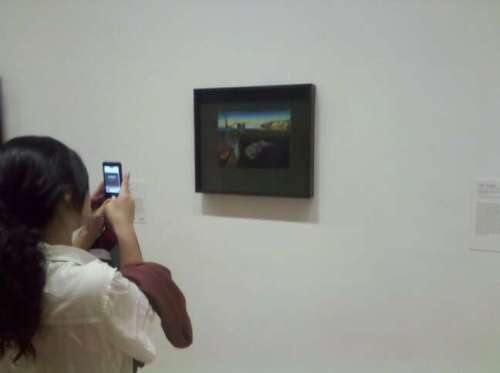 I snapped this photo of a visitor snapping a photo at MoMA for the purpose of showing people that the painting is actually much smaller than the reproduction they saw in all of their friends' college dorm rooms.

While I’m ambivalent (agree in some cases, not in others) about Winkleman’s observations about museum environments, I’m not convinced that one kind of viewing supplants another. I may take  pictures for reference and/or sharing, (which I’ve certainly done at galleries and countless museums) but would never consider that experience as a replacement for longer, considered looking without a digital device involved. I do agree that this looking at a tiny digital version of what is in front of you can in fact be a way of viewing art. Sometimes, the digital filter, or more so, framing an image of a work of art (especially a three-dimensional work), may actually add to one’s understanding of the artwork. This could, of course, only happen if there is a significant amount of time spent actually looking directly at the work of art as well.

Winkleman references Roberta Smith’s September 4th, “When the Camera Takes Over for the Eye” piece in the New York Times. Smith acknowledges that the omnipresence of cameras at the Venice Biennale can be read as a dismaying sign of superficial experiences, but also notes that:

…a photograph of a person photographing an artist’s photograph of herself playing a role is a few layers of an onion, maybe the kind to be found only among picture-takers at an exhibition.

Art fairs may be the most photographed art venues of all. Perhaps fair-goers wander through them as digital collectors, capturing art that they aren’t likely able to purchase. Winkleman likely has more considered insights into why that may be the case.

I am interested in thinking more about why more people take pictures at museums than at galleries. It seems like it should be the other way around if photos were to be usually used primarily as a sort of note taking which is my oft-used defense. Since large art museums are likely to have an online image of what a visitor deems to be a photo-op worthy artwork, why bother snapping your own crummy camera phone version?  If people actually do take photos more often in museums (which I agree seems to be the case) this suggests to me that people most frequently snap shots of paintings as a sort of “capturing” of their experience. What’s dismaying is if what’s being captured is an empty experience that didn’t include an actual considered sensory intake of the artwork itself.

I know that I do go back to pore over photos I’ve taken of art shows (regardless of the type of venue) to remind myself of what I’ve seen, but I also use my photos to show others art that I’ve seen and been affected by. I also admit to deriving a great deal of satisfaction from sharing photos of art as I’m seeing it via twitter. I imagine that if you are reading this, you’ve likely seen a twitpic or two of mine. I’m not interested in sharing the image as a trophy proving I’ve been there and seen an artwork, but rather because I relish the feedback I get from people who can enhance my knowledge of what I’m looking at. While I like getting comments like, “Awesome painting,” I’m driven by comments like @Ada_Lio‘s recent, “You find the most obscure museums! Never heard of @TheAldrich. Exhibitions sound interesting. Thanks for tweeting about them.”

I tend to post photos of works which interest me with the intent to share them with people who may never make it to see them, but even more so as though I’m sharing a tantalizing blurb from a novel I hope you’ll read yourself. I earnestly hope that sharing a quick snap of a work of art might inspire one to go see a museum exhibit or a gallery show. That’s why I’m taking pictures of pictures. Why are you doing it?